Cemetery / Burial:  Haga Cemetery (This cemetery may be gone as so far it has not been found). Independence, Grayson Co., Va.;  It is also possible he is buried at the Grubb’s Chapel Cemetery in Fox, Grayson Co., Va. , but so far grave not found. Service marker below is to commemorate him; Burial place unknown 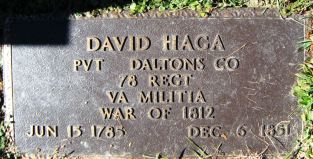 Findagrave:   His first marriage in 1806 was to Margaret “Peggy” Delph (Delp). They had 14 children between them until her death in 1841. With his 2nd wife, Sarah Bonham Haga, they had 4 more children. Sarah Bonham filed for a claim for bounty land as a widow on 23 Apr 1854, three years after David Haga’s death in 1851. She was 49 years of age at that time and it appears she was pregnant with David’s last child, Granville, at the time of his death. He left a Will that covers most of the surviving children. His death date is listed on his discharge certificate, along with his marriage date to Sarah Bonham. “Sarah: 5 Aug 1883; received a Widow’s Pension of $24 for the War of 1812 on Cert. No. 34221.”

Other notes on David Haga, and the Haga surname:

More information on the area in which he lived can be found here: New River Notes