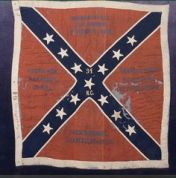 Service Record:  Enlisted in Co. A on 10 Aug 1861 and mustered in at Camp Fisher on 25 Oct 1861; became very sick in Jan-Feb 1862 and left at Gen Hosp in Raleigh, NC 10 Feb 1862; wounded in July 1862 near Richmond and went to Hosp with gunshot would right leg; served through 1863 until captured near Orange C.H., Va. 26 Jan 1864 (court marshaled and sentenced to be shot for desertion); made a POW early Feb 1864 and reported having frost bite, sprained wrist and cerebral issues (nervous anxiety, coma); might have deserted into union lines; sent to Old Capitol Prison hospital with frost bite 8 Feb 1864; transferred to NY prison 22 Mar 1864; released in May 1865 and returned home.