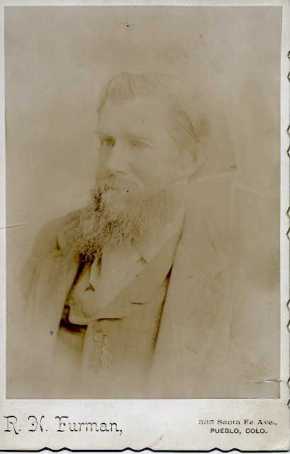 More provided by findagrave.com:   Contributed by Jean Griesan. Extracted from “Portrait and Biographical Record of the State of Colorado,” published by Chapman Publishing Company in Chicago in 1899.

George Rush Fisher is one of the successful and progressive ranchmen and horticulturists of Pueblo County, and may be termed one of the pioneer citizens and representative men of this section. He has made his special field of industry a success, and is highly esteemed and respected by those who know him best. He is engaged in general farming, and its usual concomitant, stock-raising, on the St. Charles River.

Mr. Fisher was born in Wythe County, Va., January 29, 1839, but when seven years old removed with the family to North Carolina, where his father became known as an efficient blacksmith. In that state he was reared and educated. At the breaking out of the Civil war he joined the Confederate army as a member of Company A, Twenty-sixth North Carolina Infantry, under Col. Z. B. Vance, and participated in the battle at Newbern, which city was captured by General Burnside. At Gettysburg his regiment, which went into battle with nine hundred and eighty-four men, lost in killed and captured all but sixty-four. He was taken prisoner and confined at Point Lookout, in Maryland, and three months after ward was taken to Fort Delaware, being released in 1865, just before the surrender of General Lee. He participated in eight battles and skirmishes during his term of service.

At the close of the war Mr. Fisher settled in Smith County, Va., where he made his home until his removal to Kansas in 1869. He followed farming in the latter state until 1873, and then came to Colorado, locating near Rye, on Greenhorn Creek, and in 1887 removing to his present ranch of two hundred and twenty acres on the St. Charles River, twelve miles from Pueblo. Here he has large range facilities. He has made all of the improvements upon the place, including residence, barns and fences, and now has one of the finest orchards in the county. He deals in stock and runs a dairy, his butter bringing the highest prices in the market. He is also interested in the Little Maude, a silver and gold mining property near Silverton, in San Juan County. In 1866 our subject married Miss Cynthia Cox, of North Carolina, and to them were born two sons and three daughters, namely: Frank E., who married Miss Emma Cullings; George W.; Flora A., wife of Harry Short; Effie J. and Bessie M., at home. Mrs. Fisher is a member of the Methodist Church South. Her parents, Samuel and Polly (Long) Cox, were early residents of Ash County, N.C., and spent their last days in that county.

On attaining his majority Mr. Fisher became identified with the Democratic party, but for some years he has affiliated with the Populists. He was the candidate of his party for county commissioner and was beaten only by a few votes, and at another time was nominated for the legislature but refused to accept. He is a member of the Masonic fraternity, and is quite prominent, being held in high regard by all who have the pleasure of his acquaintance. For some time he has served as postmaster of the Fisher post office, which is located at his home.